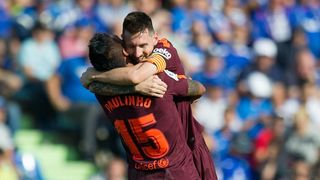 Paulinho says he feels privileged to have played with both Lionel Messi and Neymar, but the Barcelona star remains the best player in the world in his eyes.

While the former Guangzhou Evergrande midfielder is an international team-mate of Neymar's, a recent move to Camp Nou has given him the opportunity to play alongside Messi too.

And Paulinho considers the Argentina forward the superior player - even if he acknowledges that Paris Saint-Germain's Neymar has the quality to one day be the world's best.

"I've had the opportunity to play with Neymar on the national team," Paulinho told a pre-match news conference ahead of facing Olympiacos in the Champions League. "Now I'm playing alongside Messi. He's a different player, but he's the best player in the world.

"When someone is playing alongside the best player in the world, you just have to do what you need to do to make him the best and ensure that the ball gets to him as quickly and as often as possible.

Paulinho: "It's a privilege to play with , the best in the world. Playing next to him, you have to help by getting him the ball" October 17, 2017

"Messi has helped me a lot. [Neymar and Messi] are both very good players. I can only talk about the privilege that I've had being able to play with both.

"My job here is to help [Messi] continue to be the best player in the world. With Neymar, you don't know what is going to happen tomorrow, or two or three years from now.

"He may end up being the best player in the world."

Paulinho has scored twice in LaLiga since joining Barca, but concedes the transition from the Chinese Super League to one of Europe's top clubs was not easy.

"I must admit that it was hard, at first, to adapt to the particular style of football which is expected here at Barca," he said.

"But thanks to the brilliant support and help I've had from my team-mates, I now feel completely confident, relaxed and sure of my role in this philosophy of how to play.

2 - Paulinho has scored two goals for Barcelona with his first two shots on target (all competitions). Impact.September 19, 2017

"When I came to Barca, I know some people doubted me. They weren't totally convinced. But, and I've said this before, that never really bothers me. I want to show my team-mates here, because they're the ones that wanted me to come here.

"I'm just doing my job – I'm relaxed. I respect the opinions of others but I'm ambitious. For me, the main thing is to help my team-mates win titles and win games."