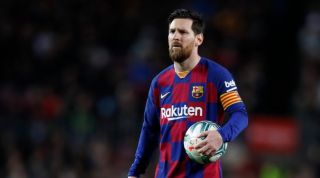 Lionel Messi has defended himself and his Barcelona teammates as the relationship between the players and the board continues to break down.

Barca became the first La Liga club to apply for an ERTE last week, which imposes a temporary 70 percent temporary pay cut on all employees during a crisis. This is in response to the coronavirus pandemic.

The club announced this, before a negotiated settlement with just the players was reached instead. The Guardian reports the first team's collective annual salaries are £347m.

There are suspicions in the dressing room that it was the board who were leaking information about these negotiations, in order to portray the players in a negative light to the public.

Messi has responded with a statement to clarify the situation:

"A lot has been written and said about the football first team at Barcelona, when it comes to the players' salaries during this state of alarm.

"First of all, we would like to clarify that we have always been willing to apply a wage cut, because we understand perfectly that this is an exceptional situation and we are always the first to help the club when we have been asked to. Indeed, we have often done so on our own initiative in those moments in which we have considered it important or necessary.

"For that reason, we cannot help but be surprised by the fact that from within the club there are those trying to put us under the microscope or apply pressure for us to do something that we have always been clear that we would do.

"In fact, if an agreement has taken a few days to be reached it is simply because we were seeking a formula to help the club and also to help its employees in these very difficult times.

"If we did not speak publicly before, it was because our priority was to find real solutions that could truly help the club and also those who are going to be most affected by this situation.

"Beyond the reduction of 70% of our salaries during the state of alarm, we are also going to make further contribution to ensure that the employees can continue to be paid 100% of their salaries for as long as this situation lasts."

Luis Suarez released the same statement, with this being the latest public conflict involving the players and president, Josep Maria Bartomeu.

This response from Messi has caused shockwaves in the world of football. In France, newspaper L'Equipe portrayed the Argentine as fellow countryman and key figure behind the Cuban Revolution, Che Guevara, on their front page.