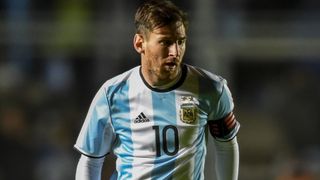 Roque Santa Cruz thinks Lionel Messi does perform for Argentina, but concedes the Barcelona superstar needs to win a major international trophy if he is to ever fully satisfy his country's supporters.

Argentina, ranked number one in the world, were runners-up at the World Cup and Copa America in the last two years ahead of the Centenario edition of the continental tournament, which starts on Friday in the United States.

Messi has won 28 trophies with Barcelona at club level, but is still waiting for his first senior honour with his national team.

Santa Cruz feels Messi always produces high quality performances at international level, but knows that is not enough for the Argentinian people.

He told Omnisport: "I think Messi found his place - I think it is the Argentine public's pressure that still talks about a Messi that is not the same one at Barcelona.

"Having seen him at different tournaments and competitions I can say that he is always one of the best and performs at a high level.

"But he still must win a title with Argentina to be close to what the Argentine public thinks he can achieve."

Santa Cruz is not in Paraguay's final squad for the Copa, a tournament which he thinks has a number of potential winners.

He said: "Paraguay are always a very solid team, very strong and very sacrificed. Once again they are regaining the level we had a couple years back, so it is a Copa America that we are all going to play wanting to win it. That will be our main target.

"Argentina are always a candidate for what they have, Messi and a lot of other players performing at the best leagues. Brazil are not going through a very good moment but besides that they always have great players.

"Also Colombia and Chile can be candidates as well because of the moment they are living and the players they have."