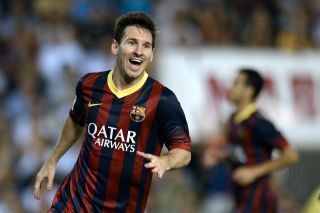 The Argentinian talisman produced another match-winning performance on Wednesday, scoring a hat-trick as Gerardo Martino's side eased to a 4-0 win over Ajax at Camp Nou.

Messi's treble - the 24th of his Barcelona career - took his tally to 62 in the Champions League, leaving him just nine shy of Real Madrid legend Raul's haul of 71.

However, the 26-year-old is quick to stress that he is only focused on securing more silverware and not the pursuit of individual records.

"The idea of overtaking Raul at the top of the all-time Champions League scoring charts is a fine challenge, but it is not essential," he said.

"We, as a team, have other more important objectives. For example, to get as far as we are capable of in this competition. To try to win it again.

"Whether the right number of goals come for me this season or not is not so important.

"Obviously I am pleased that (his hat-trick) makes it 62 Champions League goals but above that is the result and how our team played."