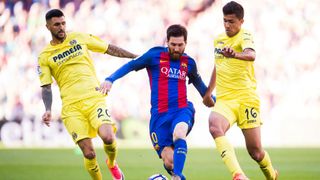 Lionel Messi led the way once again as his goal against Villarreal took the Barcelona star to 50 goals for the season before any other player in Europe's major leagues.

The Argentina captain's goal was typical in its method, Messi dribbling beyond two Villarreal defenders before cutting a shot into the far corner, via a deflection.

With Neymar having opened the scoring at Camp Nou, Messi's strike also took Barca's 'MSN' strikeforce to 100 goals for the third season in a row.

Messi, who reached 500 Barcelona goals with a recent Clasico double, also racked up a 50-goal season for the fifth time in his mesmeric career.

50 - Lionel Messi is the first player from the Top 5 European Leagues to reach 50 goals this season in all competitions. Crucial. May 6, 2017