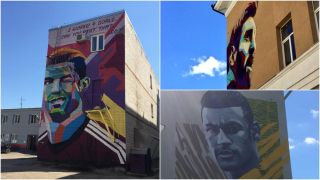 World Cup murals have represented a continuously evolving story in Kazan. While they are certainly impressive aesthetically, it's what you can't see that makes them particularly important, even symbolic of the change such a tournament can bring.

The murals project was initially started ahead of the 2017 Confederations Cup.

The local Supernova group were commissioned to produce several pieces around the city; Rubin midfielder Ruslan Kambolov and Russian great Igor Netto getting huge works dedicated to them near Kazan Arena.

Another was produced at the end of the Reka Bulak canal, depicting players from many of the participating countries with their arms around each other in a show of unity.

I’m making mural visits a daily thing at the moment.This one has a pretty impressive backdrop of the Kremlin. Sadly not all 32 teams make an appearance! June 21, 2018

Finally came the headline piece; next to the Ramada – one of two FIFA-licensed hotels in Kazan – was painted a Cristiano Ronaldo mural covering three stories, the idea being he could look out of his room and see himself while Portugal were based in Kazan for the Confederations Cup.

"There was crazy hype about that one, because it's in closed territory and everyone wanted to look," Dmitry Kudinov of Supernova told Omnisport, referencing the fact his Ronaldo art is in a garage forecourt.

Ahead of v later, I caught up with Cristiano Ronaldo...This mural was done last year in the yard of a garage. It’s in a secluded location because it was done so Ronaldo would see it out of his Ramada hotel room at the Confederations Cup. June 20, 2018

But this mural proved something of a problem in one sense 12 months later at this World Cup.

Argentina were left with no choice but to stay at the Ramada ahead of their last-16 clash with France, who had already snapped up the nearby Mirage.

Although Lionel Messi himself was probably too preoccupied with Argentina's shambles to care, there was some ridicule aimed at them for the fact their country's prodigal son was staying in a hotel that looked upon his arch-rival and nemesis.

So, up went a smaller, more swiftly completed Messi mural in the same forecourt, hiding just around the corner from the giant artwork dedicated to Ronaldo.

So, remember the mural next to the hotel Lionel and are staying at?Well, seemingly feeling a little guilty about the situation, the artist has given Messi his own in the same garage forecourt ahead of his arrival this afternoon. June 29, 2018

"It's interesting for the public, there's a hype about it and it's good for us, for Kazan," Kudinov, sporting striking red dreadlocks, said.

"It's beautiful. The mural [project] is a background of all that's happening here in Kazan and how crazy the World Cup is."

And with Brazil facing Belgium in Kazan on Friday, Supernova were put to work once more in time for the Selecao's arrival at the Mirage – Neymar getting himself immortalised on the building next door.

"I saw him [Neymar], he took a picture with the mural," Kudinov said. "My colleague told him the mural is him, so he takes a photo in public for Instagram.

"For us it's good, but we try to make the project good for everyone, fans, locals, everyone. When the World Cup finishes, tourists around the world, some will come here and maybe some will come to get these pictures. It's all good marketing for Kazan."

For some, the murals just represent a quirky story relating to the often-exaggerated drama of the Ronaldo-Messi rivalry, or – even more simply – something to snap a photograph of before consigning it to the endless depths of social media.

We tracked down Dmitry Kudinov, who produced the Ronaldo, Messi and Neymar murals in Kazan.The art is important to him because it makes people associate Kazan with superstars, but also helps bridge the gap between local administration and creatives. July 6, 2018

But such work shows a hint of progress being made below the abstract surface between the creative community and the previously obstructive authorities.

"We don't volunteer, we work commercially," Kudinov remarked. "Here we are working with the local administration [authorities] and they're a customer, that's good.

"Before, it was like, on one side was the administration and the other side was artists. No one was connected together, thinking together.

"Now, in the last two years, we try and we made a lot of ideas together."