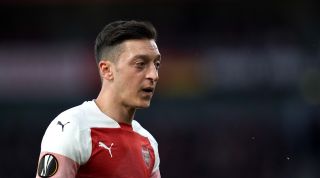 The former Germany international endured a difficult season under Unai Emery in 2018/19, making only 20 starts in the Premier League - his fewest since joining the Gunners in 2013.

Ozil's sizeable pay packet has ruled other potential suitors out of the race to sign him, but Fenerbahce hope to take him on loan next season.

The Turkish outfit will offer to pay £8m of the former Real Madrid's man £13.5m salary.

That would force Arsenal to make up the remaining £5.5m, but Emery may be willing to give the move the green light as he looks to free up space in the club's wage budget.

Ozil is thought to be happy at the Emirates Stadium, although he could be tempted by a switch to the club he supported as a boy.