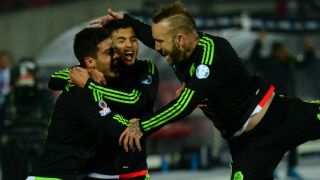 Mexico and Ecuador face a do-or-die encounter in Group A in Copa America on Friday.

Both teams have failed to impress in the early stages of the competition, Mexico having been held to two draws and Ecuador losing back-to-back games.

Only a win would be good enough to see third-placed Mexico in with a chance of automatic qualification after Bolivia stunned them in a 3-2 thriller on Monday.

With hosts Chile and Bolivia - who are level on points at the top - meeting in the other Group A game, Mexico boss Miguel Herrera should be confident of his side's chances of qualification for the quarter-finals.

Ecuador's only hope now is to beat Mexico and potentially progress as one of the two best third-placed teams, spots currently held by Uruguay and Colombia.

Recent history is not on the side of Ecuador, whose last win over Mexico came back in 2010.

But Enner Valencia - who scored but also missed a penalty against Bolivia - is under no illusions as to what they need to do to upset the odds in Rancagua and end Mexico's tournament.

"Mexico has not lost so far and we have lost two matches," West Ham striker Valencia said.

"The Mexicans are a very organised team that does well in attack. So we will have to take advantage of the spaces that they leave us."

Mexico showed plenty of defensive fallibility that Ecuador can exploit in their 3-3 draw with Chile on Monday.

Yet that showing came after a frustrating 0-0 draw with Bolivia, leaving Herrera to heap praise on his players for a display in which they showed the resiliency to come from 3-2 down to claim a share of the spoils.

"I think it [the performance against Chile] shows our team is here for an important competition," Herrera said.

"Now we have the last game of the group against Ecuador, where we will give everything to win so that we can advance to the next stage."

One player who will not feature for Mexico is left wing-back Adrian Aldrete, who is out for the rest of the tournament due to an ankle injury.

But veteran defender and captain Rafa Marquez should be able to play after recovering from a hamstring problem as Mexico aim to reach the quarters of the Copa for the eighth time.