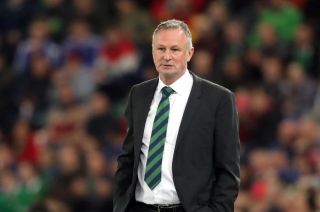 Northern Ireland manager Michael O’Neill believes their Euro 2020 qualifier win over Estonia was a coming-of-age moment for his side’s younger players before they look to repeat the trick against Belarus on Sunday.

Thursday night’s 2-0 win was Northern Ireland’s first competitive victory since they beat the Czech Republic in September 2017, before the likes of Jordan Jones, Jamal Lewis and Bailey Peacock-Farrell were in the squad.

“I think for any of the younger players, those that have come in since the World Cup campaign, they haven’t played in qualifiers,” O’Neill said.

📷 Michael O’Neill and Jonny Evans are facing the media ahead of our second @UEFAEURO 2020 qualifier against Belarus #GAWApic.twitter.com/9JGvgZAzQo— Northern Ireland (@NorthernIreland) March 23, 2019

“The Nations League was in its infancy in terms of the significance of those games, they didn’t have the same intensity of a Euro or World Cup qualifying game.

“Certainly for Jordan, Jamal and Bailey, playing that game was a big thing to come through and to have won it.

“I think all these things help you as an international player. Everyone was in good form and the key thing is to build on that.”

Jones impressed on the left wing as Northern Ireland looked to both wingers to create openings on Thursday, with his cross leading to Niall McGinn’s 56th-minute opener.

The 24-year-old, who was earning his fifth cap, came into the international break having been left out of Kilmarnock’s recent match against Rangers – a club he will join in the summer.

“Jordan was very positive,” O’Neill added. “He’ll have to adapt his game a bit from what he does with his club, but he’s moving to a big club in the summer and it’s maybe been a difficult situation to deal with.

“At the moment I think he’s enjoyed being away and that showed in his performance on Thursday night.”

O’Neill now has decisions to make on whether or not to freshen up his side. While keen to build on the momentum of Thursday’s win, he is aware that the majority of his players are not getting regular minutes at club level.

“We’re asking them to play Thursday-Sunday and we do need another high level of performance, intensity and energy, particularly in that early part of the game,” he said.

Corry Evans and Gavin Whyte remain unavailable with hamstring and thigh problems respectively, but Gareth McAuley, who also sat out on Thursday, is fit again after hamstring troubles of his own.

Lining up against Belarus can bring some happy memories for Northern Ireland, given the last meeting between the two came on the eve of Euro 2016 and resulted in a 3-0 win for O’Neill’s side.

The visitors suffered a 4-0 defeat in Holland on Thursday night, but O’Neill still believes Sunday’s match is likely to be more difficult than the Estonia game for his side.

“I think they’ll possibly pose a greater threat, maybe counter-attacking wise and attacking wise, than Estonia did,” he said.

“We have to keep the performance level at the same level if not higher to get the result we hope for.”