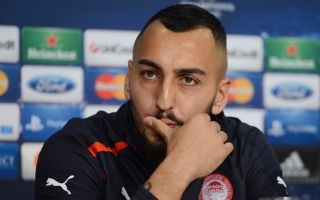 The 25-year-old has 17 goals to his name in all competitions this season for the Greek champions and Super League leaders.

Michel confirmed there has been interest from clubs in Europe and believes it may be a big ask to keep him at the George Karaiskakis Stadium.

"We've known for some time that there has interest from many clubs," explained Michel.

"But that's only logical considering how well he has been doing lately.

"There have been no concrete proposals so far, but if he keeps on doing well, it's going to be hard to keep him."