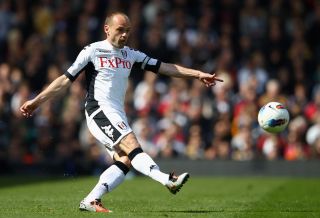 The 36-year-old has been a free agent since he was released by Blackburn Rovers back in July and has decided to hang up his boots - 20 years after scoring on his professional debut for Crewe Alexandra.

Murphy started out at Gresty Road before spells at Liverpool, Charlton Athletic, Tottenham, Fulham and Blackburn, earning nine caps for England along the way and amassing over 600 appearances in total at club level.

His career highlights included winning the FA Cup, League Cup and UEFA Cup treble with Liverpool in 2000-01 and helping unfancied Fulham to reach the 2010 Europa League final, where the London club were defeated by Atletico Madrid.

"There have been some press reports about whether I'm still playing or available but I decided a little while ago I would retire, I just didn't make it official," Murphy told talkSPORT.

"So now I'm officially retiring because I'm sick of having conversations about it and almost stringing people along. I decided three or four weeks ago I was done.

"I've had a wonderful career and can look back on it with fondness."