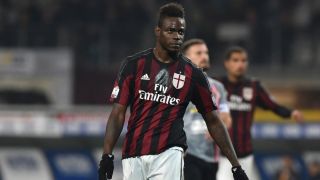 AC Milan head coach Sinisa Mihajlovic would like to see Mario Balotelli change his attitude so the club's fans can see he does care about the cause.

The 25-year-old marked his first start since returning from injury with the only goal as he scored a penalty in Tuesday's 1-0 win over Alessandria in the first leg of their Coppa Italia semi-final.

Balotelli reacted with a typically reserved celebration, but Mihajlovic – who insists the striker does care about his performances – would like to see him alter that attitude.

"I think what we saw on Tuesday proved they are not in good shape," said the ex-Sampdoria boss when asked about the fitness of Balotelli and Kevin-Prince Boateng ahead of Sunday's derby against Inter.

"I told Balotelli to celebrate when he scores a goal, but it is just not in his nature. He is a good lad and he might seem as if he doesn't care, but that is not the case.

"It is like when you are with a woman and want to tell her you love her, but you can't say the words.

"I hope Mario will change this attitude because others think he looks angry and it is not helpful. Being a football player is the best job in the world."

Injuries have restricted Balotelli to only two Serie A starts this season since he made the loan move from Liverpool in August.