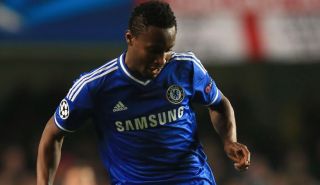 The Nigeria international has made 23 Premier League appearances for Jose Mourinho's men this season, 13 of which have come from the substitutes' bench.

He impressed alongside Frank Lampard and Nemanja Matic in the Chelsea midfield that so successfully quelled the attacking threat of Liverpool in the 2-0 win at Anfield on Sunday, and the player's agent, Olatunji John Shittu, insisted the 27-year-old would be staying put, despite rumours of a move to San Siro.

"It's all part of the transfer speculations," he told The Daily Times in Nigeria. "As far as I am concerned, there is nothing like that.

"It's just a rumour. We heard a similar thing that he was going to Galatasaray last season.

"Mikel is a fighter who will like to stay and fight for his place in Chelsea."