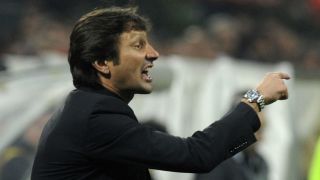 Leonardo has been appointed as the new sporting director of AC Milan as the club continues to overhaul its senior hierarchy under new owners Elliott Management.

On Tuesday, it was confirmed that Massimiliano Mirabelli had been relieved of his duties, with Leonardo then announced as his replacement, the Brazilian taking up the role for a second time.

The 1994 World Cup winner has a long history at San Siro, having played for the Rossoneri between 1997 and 2001, winning one Serie A title and one Coppa Italia, while he also managed the side during the 2009-10 campaign.

Mirabelli was the latest senior figure to depart in recent days, following chief executive Marco Fassone and general secretary Giuseppe Mangiarano out the exit door on the back of Elliott's takeover from Li Yonghong.

It has been reported that Arsenal CEO Ivan Gazidis is being lined up to replace Fassone but for now, new executive chairman Paolo Scaroni is thrilled to have Leonardo back on board.

"The return of Leonardo - a Rossoneri and a World Cup champion - to the club is another step forward in our path to success," said Scaroni.

"Leonardo's appointment is another sign of Elliott's commitment to bring in world-class and experienced leaders, who know what it takes to restore AC Milan to greatness.

"Leonardo will be in charge of managing the club's sporting area, including the transfer market, and – starting from this transfer window – he will have all the financial support he needs to strengthen and rationalise the team within UEFA's Financial Fair Play framework."