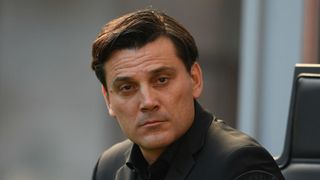 Antonio Conte is not a target for AC Milan as they continue to back head coach Vincenzo Montella, according to sporting director Massimiliano Mirabelli.

There has been talk that Chelsea manager Conte could look for a move back to his native Italy, with Milan - who spent big in the transfer window and have lost three of seven Serie A matches - a potential suitor.

But Mirabelli refused to comment on the possibility of bringing in the former Juventus coach, insisting Montella will continue in the role.

"We have a coach we are happy with, we do not think about anyone else," the Milan chief told Radio Rossonera of Montella, in response to the speculation.

Mirabelli added that he is optimistic that Milan could swoop for Torino forward Andrea Belotti in future, even if a deal was not possible this year.

"It is well known that we tried to bring [Belotti] to Milan," he added. "It was difficult for several reasons.

"But he is a strong player and a Milan fan. Who knows? Maybe one day he can wear the shirt he dreamt of as a child."

And Mirabelli also took aim at agent Mino Raiola for his role in rumours that Gianluigi Donnarumma wanted to leave Milan ahead of signing a new contract.

"Mino Raiola is one of the most important agents in the world - he has great players - we are not talking about a shameless one," he said.

"When he said 'Donnarumma will not renew', we were uncomfortable but we fought and we managed to find the deal.

"[Raiola] is a bit of an actor; he likes to say these things because talking about Milan means staying in the newspapers - even though he does not need it."