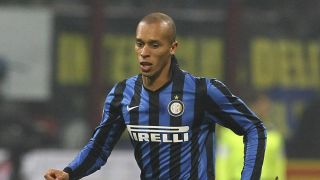 Inter defender Miranda says he has been surprised by how much more competitive Serie A is compared to La Liga.

The Brazilian signed from Atletico Madrid in the off-season and, having now played half a campaign at the San Siro club, feels Italy's top flight boasts a better balance than Spain's elite.

Roberto Mancini's Inter are top prior to the league resuming from its mid-season break on Wednesday, with just four points separating the top five teams.

"Serie A really surprised me because it's so competitive. There are many teams considered to be small which fight it out on equal terms with the big ones," Miranda told FCInterNews.it.

"In the Liga, the big teams are definitely the favourites, while I consider Serie A to be much better balanced."

Miranda confirmed Inter's objective remains to return to the Champions League, but the 31-year-old hopes to claim a bigger prize come the end of the season.

"For 2016 I want a lot of energy, and I want to conquer titles with Inter," Miranda said.

"I chose Inter because I really believed in the team. Now we want to fight for the Scudetto. We have a strong and united group that is focused on winning. I hope I can make my dream come true: becoming champion with Inter.

"Inter are a great team and they showed me a really strong project, as evidenced by the fact that we're currently first in Serie A. Our objective is to qualify for the next Champions League."