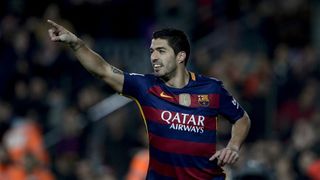 Luis Suarez says he had been the butt of Barcelona dressing-room jokes at his failure to score in 2016 prior to Sunday's thrashing of Athletic Bilbao.

The Uruguay international took his tally to 29 goals in as many games this season with a hat-trick in the champions' 6-0 victory over Ernesto Valverde's side at Camp Nou.

Suarez had failed to find the net this year prior to the game and his team-mates were quick to remind him of it in recent days.

"Strikers go through streaks and I have to say I have laughed with the team at the chances I've missed in recent games, because normally I score those," he said after the match.

"Against Athletic I had the chance to score three goals but the important thing is the victory."

Suarez earned a penalty after just four minutes, a decision which saw goalkeeper Gorka Iraizoz sent off and allowed Lionel Messi to open the scoring.

"The start determined the game and they changed the plan they came with," Suarez said. "We knew how to take advantage of the circumstances.

"Messi is the best in the world and we want to help him do things.

"We have a lot of ambition, La Liga is very difficult and nobody wants to fail."

Barca are back to within two points of Liga leaders Atletico Madrid, having played a game less.