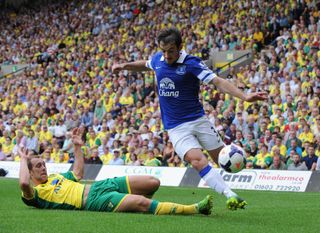 Left-back Baines sat out last Saturday's 4-0 FA Cup demolition of QPR after suffering back spasms, while his defensive team-mates Jagielka and Distin missed the last two games with hamstring injuries.

And while manager Roberto Martinez expects Baines to give him a welcome selection dilemma ahead of the Premier League clash with Norwich on Saturday by proving his fitness, the Spaniard is planning on being without Jagielka and Distin for another two weeks.

"Leighton Baines is recovering as we expected, so I don't think he's going to be too far from being able to train," Martinez told the club's official website.

"I would say Leighton will be back in training on Thursday.

"We'll then have to assess him. Remember back spasms can be cleared completely or they can leave you a little bit with a lack of mobility.

"Any player needs to be 100 per cent to be able to play and to be considered to play, so we'll assess Leighton on Thursday, see how he is and take it from there.

"Sylvain and Phil Jagielka both have got probably a period of between seven and 10 days, but I would say two weeks is the most realistic time.

"But they are players who recover really, really well from these sorts of soft tissue injuries. They are not major problems."