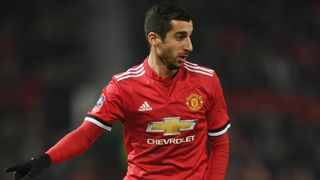 Mkhitaryan has been linked with a move away from United after failing to win over Mourinho at Old Trafford this season.

The Armenia star, who was one of Mourinho's first signings from Borussia Dortmund in 2016, could return to Signal Iduna Park, while reports have claimed the 28-year-old might be used in a swap deal for Arsenal forward Alexis Sanchez.

Asked about Mkhitaryan's future in Manchester, Mourinho – speaking ahead of Monday's visit of Stoke City – said: "My approach is that every player has a price. And I am not the kind of blind manager.

"Blind in the sense that this player is untouchable, this one can never be sold.

"I think every player has a price. So, when the transfer window is open it's also open for any club that is interested in our players.

"Mkhitaryan played the last match in the FA Cup against Derby. He probably will play the next one against Stoke. He is our player and a very good player."

"We like our squad, we believe in our squad – it's just about improving it in a balanced way."Jose Mourinho discusses the January transfer market: January 13, 2018

This season, Mkhitaryan has scored once and registered five assists in 15 Premier League appearances.