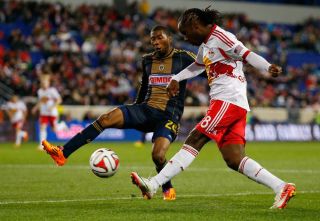 An away goal from former Paris Saint-Germain striker Peguy Luyindula effectively settled the tie in the 57th minute for New York, who progressed 3-2 on aggregate after winning their home leg 2-0 last Sunday.

Midfielder Nick DeLeon had given DC hope of a turnaround with a 37th-minute header, but Luyindula's effort rendered Sean Franklin's late goal meaningless in a game that saw a player from both sides shown a red card.

The Red Bulls will now face either Columbus Crew or New England Revolution in the Conference final, with the latter leading 4-2 from the first encounter ahead of Sunday's second leg at Gillette Stadium.

DeLeon opened the scoring as he powered on to Taylor Kemp's left-wing cross to leave New York goalkeeper Luis Robles with no chance.

They may have had brief hope when the game turned in their favour again in the 78th minute - New York defender Roy Miller sent off for a rash challenge on Franklin, meaning that the Costa Rican – who had already been booked – will miss both legs of the Conference final.

Yet United could not take advantage of their numerical superiority until the first minute of injury time, defender Franklin volleying home from close range, and they never came close to overturning the aggregate deficit as time ran out, with Espindola's frustration boiling over soon after the whistle.