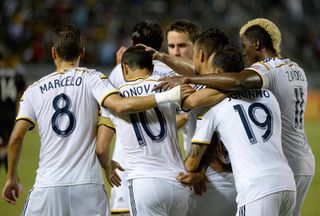 Bruce Arena's men scored three times in the first half at their StubHub Center home to set up their win over the Eastern Conference leaders.

Alan Gordon, Omar Gonzalez and Baggio Husidic struck before Landon Donovan also got on the scoresheet for Galaxy, who are second to the Seattle Sounders in the west.

The win was Galaxy's third straight, while it marked a third loss in five league games for United.

Gordon gave the hosts the dream start after just over a minute as he tucked away a simple finish.

It was 2-0 in the 25th minute as Gonzalez volleyed in a corner from Donovan to put Galaxy in complete control.

Arena's side tripled their lead before the break after a fine team move led to Husidic tapping in an AJ DeLaGarza cross from the right.

DC pulled a goal back in the 58th minute when Alex Caskey's cross from the left found the back of the net, possibly with a touch from Eddie Johnson.

Donovan ensured there would be no comeback thanks to a 75th-minute penalty, awarded after Gonzalez was adjudged to have been fouled from a corner.