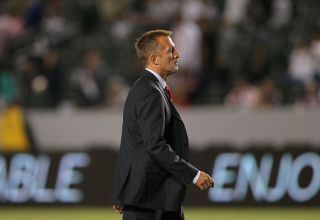 Jason Kreis' men have already sealed their progress to the play-offs, with a point in a goalless draw against Portland Timbers on Sunday confirming their place.

However, Salt Lake sit just a point behind Western Conference leaders Portland Timbers, meaning a win over bottom-placed Chivas at the Rio Tinto Stadium would put them into top spot, at least until Portland visit Chivas themselves on Sunday.

Salt Lake have endured regular frustration in the play-offs recently, following up their triumph over LA Galaxy in 2009 with two Western Conference semi-final losses and defeat in the final to Bruce Arena's side in 2011.

They head into the final game of the regular season on a run of just one win in their last five MLS games, and will once again look to star striker Alvaro Saborio - who has scored 11 goals in 15 appearances - for inspiration against Chivas.

Jose Luis Real's team sit rooted to the foot of the Western Conference, 18 points adrift of second-bottom FC Dallas having won just once in their last seven outings.

Chivas have not been victorious away from home in their last 14 games, losing on 11 of those occasions.

Their previous meeting with Salt Lake ended 4-1 to Kreis' side in May and they go into the match on the back of a 5-0 hammering at LA Galaxy last Sunday.