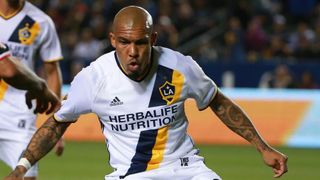 Robbie Keane made a goalscoring return in LA Galaxy's 2-0 victory over Vancouver Whitecaps, but a red card to Nigel de Jong took the shine off the club's confidence-boosting MLS win.

Goals from Keane and Jeff Larentowicz had the Galaxy cruising until tenacious midfielder De Jong saw red for a lunging tackle on Blas Perez with 16 minutes remaining in Carson on Monday.

The Galaxy, though, held on for maximum points as they snapped a seven-game winless streak in the league.

Following his Euro 2016 exertions, Republic of Ireland veteran Keane returned to the line-up and scored a stunning goal to give Galaxy a 12th-minute lead in Gyasi Zardes' 100th appearance for the Los Angeles-based club.

Welcome back Robbie!Keano with the stunner to put in front. July 5, 2016

Played in by former Liverpool captain Steven Gerrard, Keane curled the ball into the top corner of the net.

Larentowicz doubled the lead two minutes into the second half, when he headed home from Gerrard's corner, before a rush of blood saw De Jong receive his second red card of the season.

Big Red at the back post to double the lead. Gerrard with his second assist of the game. July 5, 2016

United States international and former Everton goalkeeper Tim Howard kept a clean sheet in his debut for Colorado Rapids, who played out a goalless draw against Portland Timbers.

Back home in USA for the first time since 2003, when he departed for Manchester United, Howard made a notable difference, denying reigning champions the Timbers with two saves.

The stalemate extended Colorado's unbeaten run to 12 matches, though they lost top spot to FC Dallas in the Western Conference.

Dallas moved a point clear of the Rapids, albeit with two games in hand, thanks to a 4-0 rout of Orlando City.

Walker Zimmerman and Michael Barrios had Dallas 2-0 up at half-time, before Matt Hedges and Fabian Castillo completed the demolition following the interval.