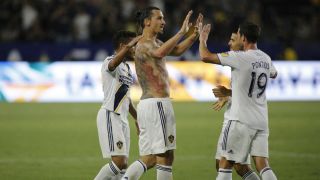 Zlatan Ibrahimovic scored his first MLS hat-trick as LA Galaxy came from behind on three occasions to beat Orlando City 4-3 in a thrilling clash on Sunday.

Former Manchester United striker Ibrahimovic was the hero at Stubhub Center, where the Swedish star netted three second-half goals as the rallying Galaxy extended their unbeaten streak in the league to nine matches.

The Galaxy found themselves trailing 2-1 at the break after Ibrahimovic teed up Giovani dos Santos for the equaliser to cancel out Orlando's 18th-minute opener, only for the visitors to restore their lead on the stroke of half-time thanks to Mickael Ciani's own goal.

LA restored parity again two minutes into the second half when Ibrahimovic rose highest to head home a Dos Santos cross in California.

The topsy-turvy contest continued after Dominic Dwyer made it 3-2 in favour of Orlando in the 54th minute, however, Ibrahimovic took matters into his hands from that moment.

Ibrahimovic found the back of the net with a diving header – set up by Oma Kamara – with 23 minutes remaining before the 36-year-old chested the ball and fired a thunderous half-volley past Earl Edwards four minutes later.

It took Ibrahimovic's tally to 15 goals in 17 appearances since arriving from United as the Galaxy – who staged a stunning comeback against Los Angeles FC to earn a draw on Thursday – moved within a point of LAFC and seven points of Western Conference leaders Dallas.

Slumping Orlando, meanwhile, crashed to their third consecutive defeat to be ninth in the Eastern Conference.