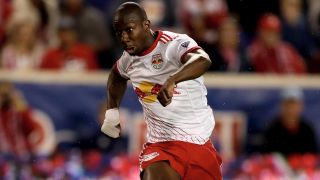 The New York Red Bulls crushed the Chicago Fire in the MLS play-offs, while the Vancouver Whitecaps also advanced on Wednesday.

The Red Bulls moved into an Eastern Conference semi-final against Toronto after a 4-0 thrashing of Chicago at Toyota Park.

Jesse Marsch's men made a red-hot start, scoring twice in the opening 11 minutes.

Bradley Wright-Phillips opened the scoring for the Red Bulls after a delightful chipped pass from Damien Perrinelle before Sacha Kljestan tapped in the visitors' second.

The Red Bulls, who finished sixth during the regular season, capped their win with two late goals through Daniel Royer and Gonzalo Veron.

Bastian Schweinsteiger came off the bench for what may have been his final appearance for Chicago.

In the Western Conference, the Whitecaps advanced thanks to a 5-0 win against the San Jose Earthquakes.

Fredy Montero headed in a 33rd-minute opener at the back post after Kendall Waston's header from a corner fell to him.

The lead was doubled just before the hour-mark by Cristian Techera, who curled in a wonderful 30-yard free-kick.

Waston got on the scoresheet in the 64th minute before a Nicolas Mezquida brace completed the win.