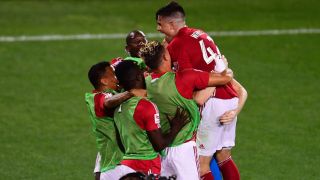 The New York Red Bulls moved to the top of the Eastern Conference in MLS, while Toronto's play-off chances were dealt a blow.

Brian White's second-half goal lifted the Red Bulls to a 1-0 win over the Houston Dynamo in New Jersey on Wednesday.

Alex Muyl's hard work led to White's first MLS goal, the forward tapping in a cross in the 55th minute.

The win was the Red Bulls' 17th of the league season, moving them a point ahead of Atlanta United.

Diego Chara and David Guzman scored in the second half for the Timbers at Providence Park.

The Timbers moved into fifth in the Western Conference, while Toronto are ninth in the East.

Elsewhere, Philadelphia Union extended their winning run in all competitions to five with a 2-0 victory over DC United and the struggling San Jose Earthquakes stunned West leaders Dallas 4-3.