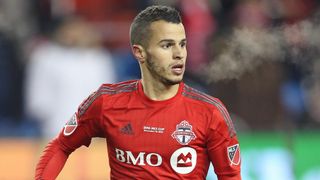 Toronto pulled further clear atop the Eastern Conference in MLS, while Montreal Impact continued their form run on Saturday.

A 3-1 win over Chicago saw Toronto move seven points clear atop their conference, while it marked the Fire's fifth loss in their past six games.

Marco Delgado tapped in the opener for Toronto in the 14th minute at Toyota Park, but Chicago levelled in the second half.

Bastian Schweinsteiger's powerful drive cannoned off the post, but David Accam managed to turn it in.

Toronto restored their lead in the 63rd minute, Nicolas Hasler heading in a fine pass from Victor Vazquez.

Victory was sealed on the counter-attack in the final minute, Sebastian Giovinco tapping in a Tosaint Ricketts pass.

Chicago are third in the Eastern Conference despite their run of poor form, sitting two points behind second-placed New York City.

In contrast to the Fire, Montreal Impact are in fine form, continuing their run with a 3-1 win at home to Real Salt Lake.

Ignacio Piatti scored a brace to help his team to a fourth consecutive win, lifting them into sixth in the Eastern Conference.

Without suspended star Kaka, Orlando City played out a 1-1 draw against a 10-man Columbus Crew.

Western Conference leaders Sporting Kansas City claimed a 2-0 win at home to Dallas, while DC United ended a nine-match winless run in all competitions by edging the Colorado Rapids 1-0.

The Vancouver Whitecaps overcame Houston Dynamo 2-1 and the San Jose Earthquakes salvaged a 2-2 draw at home to Philadelphia Union.