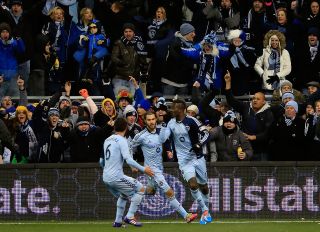 Houston struck an early blow at Sporting Park when Boniek Garcia scored in the third minute but the hosts levelled just 10 minutes later through CJ Sapong before a superb pass from Benny Feilhaber set up Dom Dwyer for the winner just after the hour mark.

Sporting claimed the MLS' Eastern Conference championship with the win on Saturday, while they also clinched hosting rights for the season-deciding MLS Cup where they will meet the winner of Portland Timbers and Real Salt Lake.

After the first leg in Houston two weeks ago had ended scoreless, the Dynamo took the aggregate lead after just two minutes with Andrew Driver's cross causing problems in the home side's penalty area before Garcia collected the loose ball, jinked past an opponent and his deflected shot found the back of the net.

Kansas City seemed stunned but slowly worked their way back into the game and, in the 14th minute, the hosts equalised.

Sporting won the ball in their forward third and got it forward to Sapong, who produced a fine finish inside the area.

The match-winning moment came in the 63rd minute as Feilhaber linked with Graham Zusi and then scooped the ball over two Dynamo defenders to on-loan striker Dwyer, who showed plenty of composure to finish past Houston goalkeeper Tally Hall.

While Aurelien Collin and Dwyer both failed to beat Hall again soon after Sporting's second goal, the home side held on for victory.