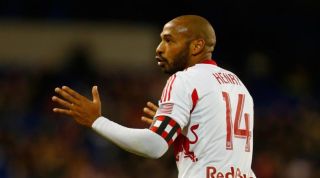 New York have been in imperious form at Red Bull Arena and that run continued with a 1-0 triumph against Houston Dynamo.

The margin of victory should have been far greater, but the hosts were frustrated by the woodwork and Houston goalkeeper Tyler Deric on multiple occasions.

Bradley Wright-Phillips was first to fire into the crossbar, with the forward spurning a great chance to open the scoring when faced with an open goal after Lloyd Sam's effort was saved.

Henry – who would later go on to score his 10th goal of the season – then hit the crossbar in the 38th minute with an excellent free-kick from 25 yards.

Sam shot just wide from nine yards on the stroke of half-time but New York scored a deserved opener just after the break.

Sam was sent racing down the right and his ball across the face of goal deflected nicely into the path of Henry, who arrived at the back post to tap in with ease.

New York squandered a host of other chances to double their lead and were given some nervy moments when substitute Tim Cahill was sent off just three minutes after his introduction.

Australian Cahill was given his marching orders for an 88th-minute lunge on Boniek Garcia, with referee Jair Marrufo brandishing a straight red card.

New York did enough to win, though, lifting them to fourth in the Eastern Conference.

The LA Galaxy moved three points clear atop the Western Conference with a 3-0 home win over Toronto FC.

Robbie Keane has been in inspired form for the Galaxy and made it five goals in three games with a first-half double.

Alan Gordon netted in injury time to seal a big win for Bruce Arena's side.

The New England Revolution kept the pressure on Eastern Conference pace-setters DC United with a 2-1 home triumph against Columbus Crew.

Columbus ended the match with 10 men after Waylon Francis was given a second yellow card 20 minutes from time.