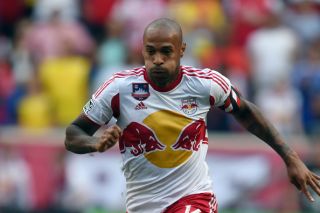 DC United had arrived at Red Bull Arena unbeaten in nine matches in all competitions, although their last loss had come away to New York.

And it was again the Red Bulls that thwarted Ben Olsen's men with Bradley Wright-Phillips and Peguy Luyindula scoring either side of half-time for the hosts to claim a lead heading into Saturday's second leg in the American capital.

In the Western Conference, champions Seattle Sounders also had a tough game away from home, coming from behind to secure a 1-1 draw at FC Dallas.

Wright-Phillips - the MLS golden-boot winner - scored his 30th goal for the season two minutes before the break, bursting onto Thierry Henry's expert back-heel to strike at the back post.

The goal was Wright-Phillips' third in the play-offs, after he scored twice on Thursday to secure a 2-1 come-from-behind victory in the East's knockout match against Sporting Kansas City.

Red Bulls were on top after the goal but wasted a number of chances before Luyindula made it 2-0 in the 73rd minute, showing impressive skill to control Henry's lofted pass over the top with his instep, before finishing between Bill Hamid's legs.

Dax McCarty missed with a strong header soon after as the home side continued to apply pressure but Mike Petke's men had to settle for the two-goal win, ahead of their trip to Robert F. Kennedy Memorial Stadium, where DC have won six of their past seven MLS games.

DC - who recovered from a three-win season in 2013 to notch a club record points tally of 59 - were held scoreless for just the second time in seven matches.

In Texas, Dallas started brightly, opening up the Sounders' defence a couple of times in the first 10 minutes but failing to find enough space for a shot on goal.

Seattle reminded the home side of the threat they could pose on the counter-attack in the 18th minute when Obafemi Martins got in behind but the Nigerian could not beat Dallas goalkeeper Raul Fernandez in a one-on-one.

A 34th-minute penalty from Michel saw Dallas hit the front after Marco Pappa tripped Andres Escobar in the box.

Michel converted from the same spot when he gave Dallas victory in the West's knockout match against Vancouver Whitecaps last week, but Osvaldo Alonso's header eight minutes into the second half restored parity for Seattle.