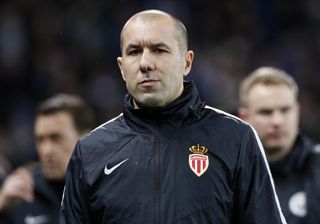 Monaco guaranteed their Ligue 1 status for another year despite rounding off a dreadful season with a 2-0 defeat in Nice.

Leonardo Jardim’s men knew only an improbable mathematical twist could send them into a relegation play-off after last week’s win over fellow strugglers Amiens.

But they still had to rely on other results going their way after an own goal from Benoit Badiashile and a Mickael Le Bihan penalty ensured the hosts would end their campaign with a win.

Jardim had urged his side to keep their fate in their own hands and they started well with Cesc Fabregas steering a 12th-minute header against the bar from Aleksandr Golovin’s corner.

Fabregas, Djibril Sidibe and Radamel Falcao all had further chances for the visitors before they fell behind in unfortunate fashion in the 36th minute.

Badiashile was under no pressure when he stretched to meet a Nice cross from the right but could only divert the ball past Monaco keeper Diego Benaglio and into his own net.

Monaco continued to hold the upper-hand in terms of chances with Fabregas in particular finding ways to test Nice keeper Walter Benitez.

Monaco’s woe increased in the 67th minute when Kamil Glick fouled Allan Saint-Maximin in the box and Le Bihan stepped up to increase the home side’s lead.

The intensity of the Monaco challenge subsided as scorelines elsewhere made it abundantly clear the visitors were not going to be threatened with the drop.

But despite later chances for Rony Lopes and Falcao, Jardim’s men were destined to finish a season they would rather forget on a low note.