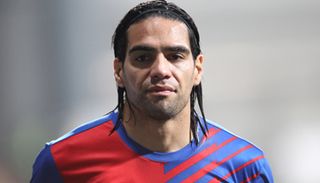 The 27-year-old is set to sign a five-year contract with the principality club, Monaco said on their website. The fee was not disclosed but media reports put it at over than 50 million euros.

Dmitry Rybolovlev, the Russian billionaire who owns the club, said: "We are absolutely delighted Radamel Falcao has accepted the challenge of coming to play for Monaco. We are proud to have secured one of the best players in the world."

The sought-after Falcao said on his Twitter feed he could not wait to play for the former French champions who also reached the Champions League final in 2004.

"I'm eager to start this challenge. I count on your support," said the Colombian who has scored 28 goals in La Liga this season with one match left at Real Zaragoza on Saturday.

He netted a hat-trick at Monaco's Stade Louis II stadium when Atletico thrashed Chelsea 4-1 in the European Super Cup in August.

Falcao joined Atletico from Porto two seasons ago, having won a treble of Portuguese league and cup plus the Europa League in 2011, when he became the record scorer in a single UEFA club competition campaign with 17 goals.

He also won the Europa League with Atletico in 2012, when he was again top scorer with 12 goals, and this year's King's Cup.

"From Atletico Madrid we wish him all the best in his new venture and we thank him for the professionalism he has shown in the two years he has been at this club," the Spanish club said on their website.

Monaco will certainly need Falcao's scoring talent to challenge in Ligue 1, which has been dominated by big-spending Qatar-backed Paris Saint-Germain who have splashed out over 200 million euros on players in the last two years.

Falcao is set to battle it out with Sweden's Zlatan Ibrahimovic to become the league top scorer after the PSG striker netted 30 goals this season.

However, while PSG will hope to make an impact in the champions league, Monaco must wait at least another year before playing in Europe having just won promotion.

Monaco's ability to attract top players has been helped by the fact that, under the principality's laws, foreigners do not pay tax on wages although the club are currently at odds with the French football authorities over tax exemptions.

The French League (LFP) has ruled that the club must move their head office to France by the beginning of June 2014, meaning their players would have to pay tax in France.