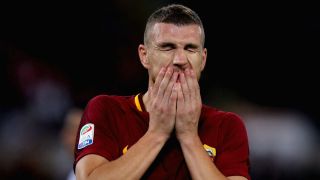 Roma have no desire to weaken their squad despite Chelsea's reported interest in Edin Dzeko and Emerson Palmieri, sporting director Monchi insists.

Chelsea have been linked with a number of strikers and left-backs in recent weeks as Antonio Conte looks to strengthen his squad.

Andy Carroll had reportedly been identified as their primary attacking target, but news that he is likely to require surgery on an ankle injury has thrown a spanner in the works.

As a result, Dzeko has apparently emerged as an alternative, while Chelsea are also said to retain an interest in Emerson, who only returned from a serious knee injury at the start of December.

But Monchi was keen to put fans at ease, reassuring them with a statement at the start of head coach Eusebio Di Francesco's news conference on Saturday.

| Monchi opens the press conference by addressing the recent transfer speculation:"The media speculation is very different from the reality. We are not inviting offers from all corners, or looking to revamp the team. Our objective is always the same – to improve the squad." January 20, 2018

"I don't want to take away from the manager's time ahead of such a big game, but we feel the need to clear some things up," Monchi said to reporters.

"It's been too often now that newspapers have spoken about Roma as a club that is looking to change everything. I even read that we're allegedly selling players without their knowledge. This could not be further from the truth.

"That we have numerous quality players, that will always attract the interest of top clubs, is not our fault - or a problem. If concrete offers come through, it'll be my duty as sporting director to weigh them up, just as my offers are assessed when I contact other sporting directors. It was what I did at Sevilla and, fortunately, that yielded decent results.

"Just as I did then, I'm in a position to make the decisions I feel are right. I can tell you, with 100% certainty, that I've made three times more calls about bringing players here to Roma than calls I've received.

"I want to be clear with you all about one thing: Roma are not going around the world soliciting offers for our players and we certainly do not want to dismantle the playing staff. In fact, it's the opposite, and I say to the fans that our objective is always the same: to improve the squad.

"A sporting director is always pleased when the names of players he is following do not appear in the papers, but do not think that we are sleeping on the job."

As for Dzeko, Di Francesco is adamant that the Bosnian striker is focused and will be in contention to face Inter on Sunday.

"Yes, he is very motivated and eager to do well," Di Francesco said.

"I hope he can be decisive. We have been working in training on how to approach the danger zone and attack more efficiently.

"I hope the rumours don't impact on the players. There's a reason why the transfer window is the worst time for coaches – a player experiences these things differently."