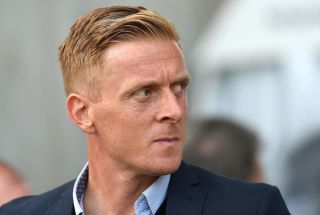 With the deadline on Monday fast approaching, Monk is keen to add a couple of new faces to his squad to augment Swansea's excellent start to the 2014-15 campaign.

Premier League wins over Manchester United and Burnley were backed up by a 1-0 victory against Rotherham United in the League Cup second round on Tuesday.

And Monk is keen to boost his options over the next few days.

"We need two new bodies in," he said in a media conference on Thursday.

"We're doing our best to get two more in. Neil [Taylor] is the only left-back, and winger-wise we've only got Nathan [Dyer] on the right.

"We'd like to strengthen that. Those are the areas I'm looking at.

"[On transfer deadline day] I'll either be working or playing with twins trying to settle them down, but you do keep an eye on it - I will probably be working.

"It will be an interesting night to see what's happening at other clubs.

"But hopefully we can get out business done by then and sit back and relax."

Wilfried Bony has been linked with a move away from the Liberty Stadium after 17 Premier League goals in an impressive debut season.

But Monk said: "All summer we've had no concrete offers, nothing official and we just get on with it.

"I'm not naive, I know things happen, but nothing has happened so far.