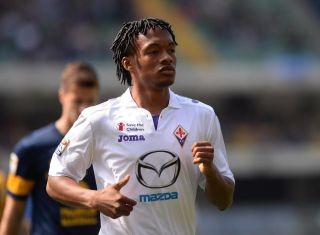 Cuadrado has been heavily linked with a move away from the Florence club, who he joined from Udinese in July 2012, this close-season.

Barcelona and Manchester United are both thought to be keen to sign the 26-year-old, who starred as Colombia reached the quarter-finals of the World Cup in Brazil, away from the Stadio Artemio Franchi.

Cuadrado was left out of Fiorentina’s 2-1 friendly win over Real Madrid last Saturday, increasing speculation that he could be set for pastures new.

However, Fiorentina coach Montella does not expect to lose Cuadrado's services before the month is out.

"I have never thought of losing Juan," Montella said. "He's been here in the past, he is here now and he will be here in the future.

"I don't think about how his [Cuadrado's] story might finish.

"A player like him can play in every position in midfield."

Cuadrado, who is under contract in Tuscany until 2017, has scored 20 goals in two seasons with Fiorentina.