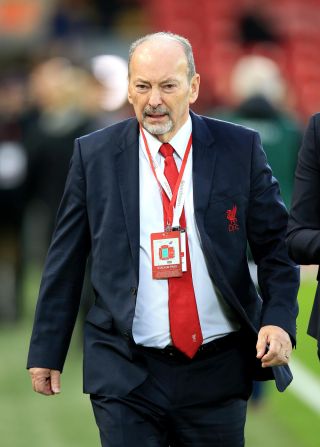 Liverpool chief executive Peter Moore will raise the issue of ticket allocations with UEFA president Aleksander Ceferin when the pair meet for the Champions League final in Madrid next week.

Reaching a second successive final has brought more complaints from Reds fans about the number of tickets given to each side – just 16,613 for the game against Tottenham at the 64,000-capacity Wanda Metropolitano on June 1.

While there is little which can be done to alleviate the situation this year Moore will speak to Ceferin about the issue and other logistical concerns.

“I will see him and usually when I see Alek there are 20 things (to talk about),” said Moore, speaking at the Anfield launch of a global partnership between the LFC Foundation and Right To Play.

“We talk to UEFA every day, we have been talking to UEFA for 40 years as you well know for things like this.

“But we do want UEFA to understand this city, which they do. Ceferin was here last year for the Manchester City home (Champions League) game and I spent a lot of time with him. I will see him next week.

“Today our football club is focused on helping our supporters everywhere. It was about getting the M&S Bank Arena (the venue for a big screen viewing of the final) all done and sorted and that was done today.

“Then we are getting our fan park ready in Madrid – our team is right there now, helping supporters.

“The good news is we are going to a Champions League final but there is a lot of work to do to make it work.”

The LFC Foundation and Right to Play, a global organisation that protects, educates and empowers children and young people by harnessing the power of sport and play, hope to initially raise £1million for projects in Bangkok and Liverpool.

Moore believes the pulling power of the club, manager Jurgen Klopp and its resurgence in the last couple of years can help boost the message.

“How do we use the power of the football club for good?” he added.

“Success on the pitch helps enormously, it provides a global spotlight. What we’re about to do next week amplifies that again.

“What have we won? And yet this brand, this football club, these players – I don’t like to use the word ‘powerful’ – but it is more loved than ever.

“Our players – and our manager – understand what it means to play for Liverpool Football Club.

“When you live in this city you realise what the fans give you and what you are obligated to give back.

“Jurgen sees the broadness of what he does as the Liverpool manager, Shankly once said ‘Liverpool was made for me and I was made for Liverpool’ and I would argue Jurgen is the same.”