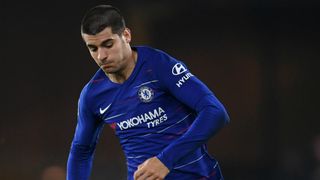 Diego Simeone refused to confirm or deny whether Atletico Madrid are among the clubs interested in disgruntled Chelsea forward Alvaro Morata.

Former Real Madrid frontman Morata has been linked with a return to LaLiga, though Sevilla said a deal for the Spain international would be "very, very complicated".

Morata – who has only managed nine goals in all competitions this term – has scored just 16 Premier League goals since joining Chelsea from Madrid in a reported £60million transfer in July 2017.

Atletico have reportedly joined the race to bring Morata back to Spain but head coach Simeone was coy following Wednesday's 1-1 draw with Girona in the Copa del Rey.

"The only thing I'm thinking about is the upcoming match against Levante," Simeone told reporters.

"I don't speak about players that aren't with us, only those that are.

"I can't confirm or deny anything because coaches wait to see what the club can do.

"Some players want more minutes, some could be sold by the club, some could arrive. We need to wait until January 31."