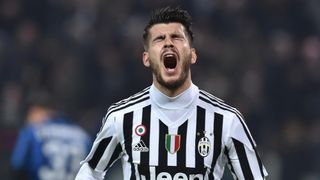 Juventus striker Alvaro Morata has warned Bayern Munich that a "hellish" reception awaits them in Turin for the first leg of their Champions League round of 16 tie.

The Serie A champions made it to the final of the competition last term, where Barcelona proved to be too strong, and they will be looking to go one better this campaign and lift the trophy for the first time in 20 years.

They will first have to deal with Pep Guardiola's men, though, and Morata is determined to make life difficult for the Bundesliga leaders.

"The first leg will be very difficult for Bayern," Morata told Sport Bild. "Our stadium will be like hell for them.

"We are very well organised and compact. We have conceded only once in our last nine games. We are a very intense team and everybody is willing to go the extra mile for a team-mate."

However, Morata realises Juve cannot afford to make any errors and has singled out Robert Lewandowski as Bayern's main dangerman.

"We are playing a very strong pressing game and we have to be cautious, because one minor mistake could cost us against Bayern and that could cost us the tie," he added.

"Lewandowski is the best striker in the world for me. I remember swapping shirts with him, he has an incredible six-pack.

"It will be an eye-opener for me to see him play again."