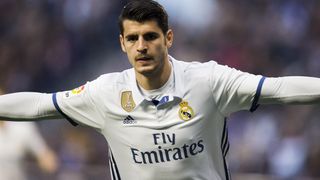 Chelsea forward Alvaro Morata hinted he could be interested in a potential return to Real Madrid.

Morata, 25, has scored 10 Premier League goals this season after arriving from Madrid for a reported £60million in July last year.

The Spain international is sidelined with a back injury, with head coach Antonio Conte unsure when to expect the forward to return.

In an interview with Movistar+, to be aired in full later this month, Morata said he was happy at Stamford Bridge, but he may be interested in heading back to Madrid.

"Obviously I have to respect Chelsea, who made a huge effort to sign me and I'm very happy here," he said.

"But Madrid will always be Madrid for me."

Morata, who came through the youth system at Madrid, scored 31 goals for the LaLiga giants before eventually leaving in a permanent deal last year.