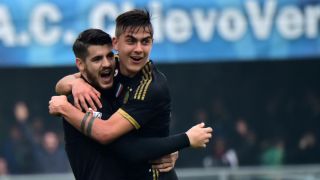 Alvaro Morata is not getting carried away after his double helped Juventus beat Chievo 4-0 to make it 12 Serie A wins in a row.

The reigning champions remain second in the table following Napoli's 5-1 victory over Empoli later on Sunday.

And Morata, who followed up his brace in the midweek Coppa Italia win over Inter with his first two league goals since October, has urged his team-mates to keep going in the weeks to come in order to keep their title ambitions alive.

"This was a highly important win, as we knew that we had to collect all three points in order to keep fighting for first place," Morata told reporters.

"I'm happy with the goals, the overall performance and, of course, the victory. We played without ever taking our foot off the gas.

"When we're firing on all cylinders as we were versus Chievo, we're one of the best teams around. On days like these, we make life extremely difficult for the opposition.

"We're not thinking about the past, but the future. We have Genoa next on Wednesday and then Frosinone on Sunday. We just need to keep going in this vein, as that's the only way we'll secure top spot."