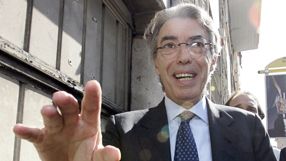 Media reports had speculated the Spaniard would be sacked if Wednesday's Group A game, where holders Inter can progress to the last 16 with a win, goes badly.

The treble winners lost 2-1 at Chievo on Sunday to fall nine points behind Serie A leaders AC Milan, who beat their lacklustre rivals in the city derby two weeks ago.

Asked if faith would be shown in Benitez irrespective of Wednesday's result, Moratti told reporters: "Yes but we must try to get a good result because it is rather important.

"The coach and the squad must understand that Wednesday's game is very important. Tired or otherwise, the game absolutely needs to be played with anger because otherwise we won't go anywhere."

Benitez was always likely to face a tough job in matching Jose Mourinho's stunning season last term when Inter won the Champions League, a fifth straight scudetto and the Italian Cup but a raft of injuries and lack of new buys have hit his plans.

"I'm pleased to have the feeling that the team and the club have certainly not shown a lack of confidence in him," Moratti added.

Inter are likely to find out on Tuesday whether top scorer Samuel Eto'o will be added to a lengthy list of absentees after headbutting Chievo defender Cesar in the chest.

The officials missed the incident but Serie A will assess video evidence and the Cameroonian could face a suspension for several games.

"It could lead to a heavy ban. I hope nothing happens, but it's difficult," Moratti concluded.