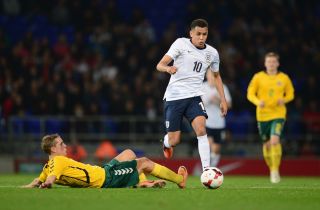 Morrison and Berahino have hit the headlines this season for their outstanding club form and both scored for England Under-21s in Tuesday's 5-0 win over Lithuania, which followed a 4-0 victory in San Marino last Thursday.

Andros Townsend and Raheem Sterling are two young players that England manager Hodgson has handed debuts to as he nurtures the best young talent at his disposal.

No sooner had England secured qualification on Tuesday to the 2014 World Cup than attention turned to who could be on the plane to Brazil next year, but Hodgson is keen stress that Morrison and Berahino are not ready to be promoted to the senior side just yet.

"I know Ravel Morrison is a player who interests you (the media) all," said Hodgson.

"He interests us as well because the lad has got fantastic talent.

"Saido Berahino, whom I know well from my West Brom days, has been a breath of fresh air too.

"I do like the way the Under-21s play. With their movements and passing ideas it is a mirror image of what we are trying to do.

"But, to be fair, San Marino and Lithuania Under-21s are not quite the same level as we are talking about with the England senior team.

"And I have to say, (Danny) Welbeck, (Kyle) Walker, (Jack) Wilshere, even to some extent Ross Barkley, have proved they can do it.

"So these young lads have a few of their own to get past before we even start talking about Steven Gerrard, Wayne Rooney and Frank Lampard."

Morrison has scored twice in his first six Premier League games for West Ham, while Berahino's first senior league goal for West Brom was the winner in a 2-1 victory over champions Manchester United at Old Trafford.