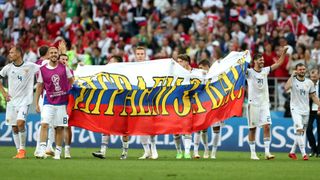 The streets of central Moscow were full of proud Russians on Sunday, celebrating their country's progression to the last eight of the World Cup.

Earlier in the day, the host nation had held 2010 champions Spain to a 1-1 draw after extra-time before saves from Igor Akinfeev denied Koke and Iago Aspas in the shoot-out to put Stanislav Cherchesov's side through.

While there was unbridled joy at the Luzhniki Stadium, that paled into insignificance when compared to the outpouring of national pride on Tverskaya Street, the main thoroughfare heading towards Red Square.

Thousands of Russians had come out with strangers hugging and high-fiving each other with most clad in either a scarf or flag.

The road itself had been brought to a near standstill by drivers more interested in soaking in the atmosphere than reaching their destination.

People and flags hung out of cars and the cacophony of horns and sirens was deafening.

Russia now head to Sochi for their quarter-final against Croatia, another side who advanced on penalties on Sunday after edging out Denmark in Nizhny Novgorod.

If they are victorious there, they will return to the capital for the semi-final and, potentially, the final.

I thought this was supposed to be a conservative country!! July 1, 2018