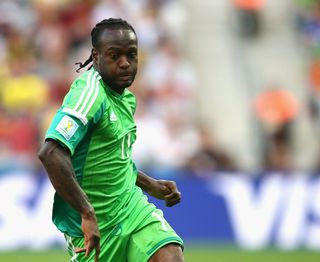 The 23-year-old winger was likely to have had a peripheral role at parent club Chelsea this season and opted instead for a temporary switch to the Britannia Stadium.

Moses spent 2013-14 on loan at Liverpool, but first-team opportunities at Anfield proved limited.

The Nigeria international - who featured for his country at the World Cup - has now plumped for a move to Staffordshire and he revealed that manager Hughes was an influencing factor.

"I had a few options to go to other clubs, but when I heard about Stoke I knew that they had a good manager and I thought it would be good to come here and work under him," he told the Stoke Sentinel.

"He's a great manager, and was a great footballer too, and for me to play under him will be a great achievement.

"I just want to give 110 per cent to the club and hopefully we will achieve what the club are looking to do this season."

Moses scored just two goals in 22 appearances for Liverpool last term and will hope for a more influential role in a Stoke team looking to build on their highest Premier League finish of ninth in 2013-14.

He could make his debut for Stoke at Hull City on Sunday, with the club looking to bounce back from a 1-0 home defeat to Aston Villa in their top-flight opener last Saturday.