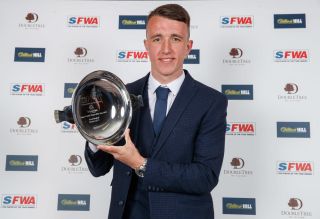 Celtic have been warned they will have to fork out “significantly more” than the record fee they paid for Motherwell’s Phil O’Donnell 25 years ago if they want to land latest Fir Park talent David Turnbull.

The Scottish Daily Mail reported on Friday morning that the the Hoops were plotting a £1.2million swoop for the Scottish Football Writers’ Young Player of the Year.

But Well chief executive Alan Burrows insists any potential suitors for the 19-year-old will have to come up with a fee far in excess of the £1.75million they received in 1994 when O’Donnell made his Parkhead switch.

And Press Association Sport understands the Steelmen will want at least double the sum that O’Donnell went for a quarter of a century ago.

Posting on Twitter, Burrows said: “Getting some questions re David Turnbull, given today’s newspaper report.

“I try not to reply to speculation (for obvious reasons), but to reiterate what I’ve already gone on public record as saying. We will only consider offers of significantly more than our record fee received.”

Responding to several comments on his initial tweet, Burrows added: “He’s our player and we’ll only sell on our terms. I’m merely making it abundantly clear (to anyone that cares) than £1.2m is absolutely nowhere near our valuation.

“To be fair, those who have sniffed, directly or otherwise, already know that.

“We’re a ‘selling club’. We’ve sold a player in five of the last six windows. We reached two cup finals in 2017-18 and turned a record profit. We sell players, but only on our terms. However, that will absolutely not be for £1.2m, not even close to it, I can assure you of that.”

Turnbull has emerged as one of Scottish football’s hottest properties since bursting into Stephen Robinson’s first team in the early part of last season.

He scored 15 goals in 30 league appearances for the Lanarkshire side in his breakthrough campaign and was rewarded with a new deal, tying him to Fir Park until the summer of 2021.

He was also shortlisted for the Professional Footballers’ Association Scotland Young Player of the Year prize but was this week overlooked for a call-up to Steve Clarke’s first Scotland squad ahead of the Euro 2020 qualifiers with Cyprus and Belgium.