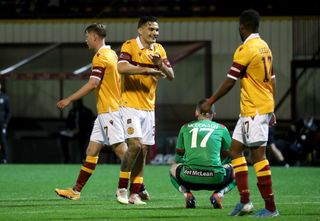 Motherwell have joined Aberdeen and Rangers among the seeded teams in the Europa League second qualifying round thanks to Coleraine’s shock win over Maribor.

Well moved into the second round with a 5-1 victory over 10-man Glentoran at Fir Park with Aberdeen progressing thanks to a 6-0 triumph against NSI of the Faroe Islands.

The Lanarkshire side squeezed into the seeds after Maribor, who have knocked Rangers, Celtic, Aberdeen and Hibernian out of European competitions in the past decade, lost on penalties at home against Oran Kearney’s side following a 1-1 draw in Slovenia.

That means Motherwell cannot be paired with the likes of Tottenham, AC Milan, Basel, Galatasray and Wolfsburg in Monday’s draw.

With the first qualifying-round draw split into regional groups, Motherwell and Aberdeen could find themselves up against the likes of Coleraine, Welsh side Bala Town, who beat Valletta in Malta, and Shamrock Rovers, who progressed following a 12-11 penalty shoot-out victory over Finnish club Ilves.

The unseeded teams also contain B36 Torshavn of the Faroes and Scandinavian sides IFK Gothenburg, Hammarby, Viking Stavanger and Bodo/Glimt.

Celtic will join the competition at the third qualifying round following their Champions League exit against Ferencvaros.

🚀 Stephen O’Donnell with a terrific strike for @MotherwellFC in the @EuropaLeague 👏— Scotland National Team (@ScotlandNT) August 27, 2020

Motherwell endured a difficult hour against Glentoran but the sending-off of Seanan Clucas and two missed chances from the 10 men allowed Callum Lang to put the hosts ahead.

The game opened up for the hosts and Stephen O’Donnell, Liam Polworth, Tony Watt and Christopher Long netted before Robbie McDaid hit a well-deserved consolation from the spot.

Motherwell manager Stephen Robinson said: “Our quality shone through. I have to give credit to Glentoran. I know a lot of the boys, I have a lot of respect for a lot of the boys and some of them have proved they can play at a higher level. Glentoran have put a good squad together.

“Total respect to them but it’s about us and how much belief we have in the players and that shone through in the closing stages.”

Aberdeen got their breakthrough late in the first half at Pittodrie with goals from Lewis Ferguson and Curtis Main. Ryan Hedges hit a second-half hat-trick and Jonny Hayes struck a spectacular effort.

Manager Derek McInnes said: “Another home tie would be perfect for us. It is cup football over 90 minutes, it brings a bit more trepidation but also excitement. If we get through, then we will be glad for that.

“The travel situation means a home tie is something that we would be looking for.”