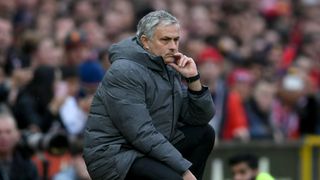 Manchester United will put themselves in contention for Champions League glory if they overcome Sevilla, according to Jose Mourinho – even though they are not one of the best in teams in the tournament.

United host their LaLiga opponents on Tuesday with the last-16 tie all square at 0-0 following a drab first leg at the Ramon Sanchez Pizjuan.

Marcus Rashford's brace to sink Liverpool in the Premier League on Saturday bolstered confidence around what Mourinho's squad might be able to achieve this season, although the man himself remains a realist.

"I think we are not one of the best teams in the competition," he told a pre-match news conference.

"But I think that when a team arrives in the last eight anything can happen.

"When you are in the last 16 it looks really, really far [away] but when the team gets in the last eight you start smelling semi-finals.

"I think when a team gets into the last eight the feeling is you are [competing] among the best but anything can happen."

Mourinho led Porto to an unlikely triumph in the 2003-04 competition and did likewise with Inter six years later.

Asked whether he felt he had a squad good enough to make it a hat-trick of titles with United, he replied: "Not yet.

"But when a team reaches the last eight anything is possible. Now, I have only one name in my mind. It is Sevilla. I know it is very difficult to go through.

"If we go to the quarter-final the opponent will always be one of the big names in European football. But we will try."

Mourinho insisted the game against Sevilla was "more important" than the one just gone against Liverpool.

He also cited Sevilla's group-stage draws against Jurgen Klopp's men as a sign of their quality.

"This a very difficult match. We are playing against a team who didn't lose against Liverpool home and away, scored goals at Liverpool and drew the match in Liverpool," he added.

"I say Liverpool because they are an example of a very good team. It's a team with a big tradition. I say Liverpool to show that Sevilla is a really good team and the result of the first leg is one that leaves everything open.

"I do not feel like we have any advantage at this moment."

Paul Pogba sat out the Liverpool win and only re-joined training for the second half of his team-mates' session on Monday, although Anthony Martial is fit to return.

Defenders Phil Jones, Marcos Rojo and Daley Blind are expected to remain on the sidelines with midfielder Ander Herrera.

Zlatan Ibrahimovic took part in training before the Sevilla game, although it remains to be seen whether the veteran Swedish striker is in any condition for his first competitive action since Boxing Day.