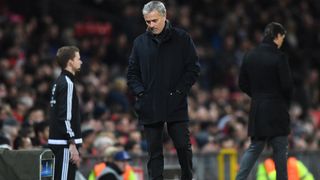 Jose Mourinho and Manchester United were left shell-shocked in the Champions League as Sevilla pulled off an away performance which might have earned grudging admiration from the Portuguese were it not so damaging.

United came into Tuesday's last-16 second-leg tie as firm favourites but were undone by the inspired Wissam Ben Yedder, who came off the bench late in the piece and within six minutes had struck twice to suck the life out of Old Trafford.

Apart from a raucous corner behind David de Gea's goal where the Sevilla supporters were housed, the famous stadium was suddenly bereft of belief, the tension that had preceded Ben Yedder's introduction replaced by despair.

There was brief hope as Romelu Lukaku netted with six minutes of normal time remaining, but United still needed two more and it was a mountain that Mourinho's side were never likely to scale.

What may gall Mourinho the most will be that opposite number Vincenzo Montella's game plan is one the United manager has utilised to such good effect on so many occasions in the past.

During his spells with Porto, Chelsea, Inter and Real Madrid, Mourinho has developed a reputation as the master of stifling the opposition before striking at the most opportune moment, but the tables were turned in dramatic fashion here.

Few would argue that, man-for-man, Sevilla have greater attacking weapons at their disposal.

And yet the likes of Lukaku, Alexis Sanchez, Marcus Rashford and Jesse Lingard showed only glimpses, so well-marshalled were they by Sevilla's central defensive pair of Simon Kjaer and Clement Lenglet, while Steven N'Zonzi patrolled in front of them with a far greater measure of control than United could muster.

Paul Pogba, as in the goalless first leg three weeks ago, began on the bench and was introduced on the hour in place of Marouane Fellaini, with Mourinho risking the ire of those United fans who demand an attacking approach on home soil by starting the Belgian.

If Mourinho hoped the Frenchman's introduction would inspire United, he was desperately disappointed as it was Pogba's compatriot who proved the star turn.

Ben Yedder received Pablo Sarabia's pass and thumped a finish beyond De Gea for his first, and the goalkeeper – instrumental to United's clean sheet in Seville – could not keep out the striker's back-post header four minutes later.

If ANYTHING pushed us to history at Old Trafford it's you THANK YOU SEVILLISTAS  March 13, 2018

It was a glorious triumph for the visitors, but the spotlight will fall on Mourinho and his disjointed collection of superstars.

A two-time winner of this competition, Mourinho and his tactical nous had been touted as the primary reason to consider United genuine European contenders this time around.

But in a twist few saw coming, Sevilla pulled off the plan so often perfected by the Portuguese, to leave United facing far more questions than answers.