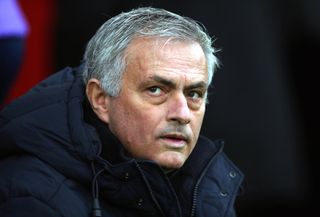 Tottenham boss Jose Mourinho feels it would be harsh for Dele Alli to receive a ban for making fun of the coronavirus on social media.

Alli has been asked for his observations by the Football Association following a Snapchat post last week in which he joked about the virus outbreak and appeared to mock an Asian man in an airport.

He quickly deleted the post and apologised but could still find himself in hot water with the governing body, who banned Manchester City midfielder Bernardo Silva earlier in the season for a similarly ill-thought out tweet.

Mourinho has discussed the situation with the 23-year-old this week following his return from Dubai and was content with Alli’s contrition.

And he thinks a suspension would be too much.

“I feel that would be unnecessary, but I am nobody,” Mourinho said. “In relation to these decisions, I am nobody.

“I am somebody in relation to Dele’s process of, let’s say, professional education and I felt it so, so easy because of the way he reacted.

“So I think it is unnecessary because the player understands the naivety of the situation, the player is a good guy, the player even in the dressing room has a big Asian friend that he loves.

“So there was no intention at all. He immediately regrets, immediately makes a public apology. I feel it is unnecessary but I am nobody.

“I think he learned the lesson immediately with the embarrassment and he didn’t need much time to realise again the childish or naivety of the situation. I feel unnecessary. I don’t feel we need more than that.”

Mourinho will hope to have Alli available as Spurs begin a run of three games in six days.

Sunday’s trip to Aston Villa is followed by a Champions League last-16 first-leg match with RB Leipzig on Tuesday and then a vital clash in the top-four race at Chelsea on Saturday lunchtime.

The Portuguese has again voiced his unhappiness at the schedule, baffled why in a weekend where there are only six games his side have to play on Sunday afternoon.

“Friday night, Leicester v Wolves. Why? Do they have a Champions League game next week? No,” Mourinho said.

“No Leicester, no Wolves. Wolves has a Europa League game on the Thursday.

“We are the only team in England that plays a Champions League game on Tuesday; we don’t play Friday, we don’t play Saturday, we play Sunday.

“If you think that this is normal, I don’t think it is normal.

“You can tell me it was because our game was chosen to be on TV on Sunday and I ask you, in the other five matches of the Premier League this weekend, there is not another one that could be played on Sunday at 2.30pm?

“It’s as simple as that. That’s the only thing I say – there is no care. They just chose what they want and they don’t think how they can hurt an English team.