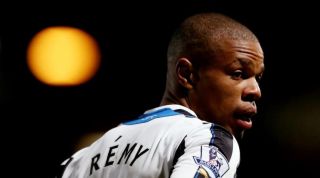 QPR manager Harry Redknapp revealed on Saturday that Remy - left out of the squad for the 1-0 win over Sunderland - was heading for the Loftus Road exit door, suggesting that Chelsea was his likely destination.

And, following Chelsea's stunning 6-3 Premier League triumph at Everton later the same day, Mourinho explained that the club's pursuit of Remy had been stepped up after Fernando Torres' departure for Milan.

"Today I told my people in the cub that I have no news until the end of the game," the Portuguese told Sky Sports. "They know I don't like to communicate before the game.

"Obviously I know that we are trying since yesterday - since we knew that Nando [Torres] was leaving - that we were trying to get Remy.

"But now, when I arrive in the bus is the time to make some calls and to have news."

Remy looked set to move to Liverpool last month but it was reported that he had failed a medical at Anfield.

However, Mourinho is not concerned about the former Marseille forward's fitness.

He said: "I have one fantastic doctor, we trust him completely, he has lots of people working with him in different areas.

"For sure they will try to identify what the situation is. But the information we have already from specialists in different areas is that he doesn't have a problem to play football."

Remy's signing would add further firepower to a Chelsea squad that already boasts the English top-flights top scorer, with Diego Costa having netted twice on Merseyside to make it four in three games for the Spaniard.